Their stories became their lives... 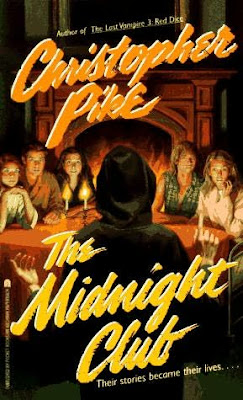 They were all going to die.

Ilonka naps and dreams about the Rishi from Remember Me.
She wakes up in time for the Midnight Club meeting. Spence opens the meeting with a story of a vengeful teenage magician who burns down his school gym during a basketball game. His assistant puns that the gym was filled with "one thousand die-hard fans." Ha. But that's not my favourite "burning gym" play on words. The gym in my hometown burned down a while ago and my brother came up with, "They worked out until they felt the burn." It's funny because no one was hurt. And because I have a comically bad sense of humour. And no sense of when to stay on topic. Actually, I was seriously morbid from reading about these young, cold, weak, sick, dying kids. I needed to cheer myself up with wordplay.
Tonight the meeting is a little different. Someone brought booze. I like it. Ilonka tells an ancient India story this time. Yeah, this crap was jam-packed with symbolism (I'm guessing... I'm a dirty, rotten skimmer). Kevin continues his story of Herme, the recovering angel. Anya asks him to finish it, but he's too tired to make it to the end.
The next morning, Ilonka finds Anya dead in her bed. Traumatizing! Not to mention that there's a rumour going around: someone's not terminal! And Ilonka just had new scans! She's pretty much celebrating until she sees Sandra packing a suitcase. No one at Rotterham has ever re-packed their shit before. Turns out that Sandra's Hodgkin's disease was misdiagnosed as a worse type than what she really had. And Ilonka still only has 2 weeks to live. Two weeks! Suck it, Dawn Rochelle!
Ilonka is so stressed that the doctor gives her a shot. She dreams about Master. God, Pike, quit name-dropping Master all the mofo time. Just say that she had a dream about a certain young adult author with a massive ego who isn't R.L. Stine.
When she wakes up, Kevin is with her. He also dreamt about Master and now he welcomes death. Ilonka asks to hear the rest of Kevin's angel story, because Anya didn't get the chance. Herme and Teresa moved to New York, but Herme really lost his awesomeness once he became mortal. He finds out Teresa is cheating on him, so he quits painting and becomes a taxi driver. Then he moves to Colorado (??) and becomes a park ranger (???) and falls in love with another park ranger (<3) and gets paralyzed during a forest fire :( and dumps his girlfriend :(:(:( and goes to med school (???) and becomes a doctor in a free clinic in Los Angeles (?!) where he meets his old love, Teresa (!!!!!!!!!!!!!1) who is some kind of crackhead now (!) and she has AIDS :( but he paints a picture of how beautiful she was in her youth, and she realizes that her doctor is Herme, and then she dies. At some point, I needed to quit saying: "What the hell, Colorado?" and just go with it.
Ilonka is in tears after the story, and wants to sleep with Kevin. Unfortch, he's too weak from his cancer to do anything, so they just sleep naked in each other's arms. In the morning, he says he loves her, then dies.
After Kevin's death, Ilonka visits Spence. She wants to know what was up with the booze at the meeting the night Anya died. Was it drugged or what? Spence confesses that he actually has AIDS, and had infected his partner, who died painfully from it. In order to redeem himself for causing his partner to die that way, he agreed to help Anya die with dignity. He drugged Ilonka, then smothered Anya in the bed next to her.
Ilonka tells Spence about a dream she had where Kevin offered himself to God to share any punishment Ilonka was going to have to suffer. But it was all about witchcraft and symbols and junk. You know how it is. She tells Spence that if he is punished in the afterlife, she will be with him and share the punishment, just like Kevin will do for her.
Shortly after, Spence slips into a coma and dies. Ilonka invites Anya's ex-boyfriend, Bill to Rotterham. She gives him the broken statue, but wait! It's not broken anymore. Love conquers all. Love fixes shit. Love is a many splendored thing. Love lifts us up where we belong. All you need is love. Yada yada.
Lastly, Ilonka dies. Then there's the obligatory epilogue, which takes place on the Space Beagle III. Yeah, you know what I'm thinking. Space travelers "Eisokna" and "Karlen" are done monitoring the situation on Earth and are ready to go wherever they're going. "Yes. I'm ready to leave."

So, how glad am I to put this depressing pile on the "read" list? Um, very. This book managed to combine every single thing that I hate about Christopher Pike books into one book, and make it into a really long, morbid, depressing, soul-sucking heap. My Christmas wish is for friggin' spaceships to be delivered to the plot device landfill and never seen again. But we know better than that, right?
And tomorrow (or Monday - being a recovering slacker ain't easy), I'll have the totally random offering of Tales of Terror #2.
Posted by LongWinter at 10:57 PM

Wow, this book does sound bad. I remember liking it when I was a kid. The story of Dana is the one thing I always remembered. Especially the part where she has an orgasm in front of her parents. :p

I HATED Ilonka's stories. And I always skimmed (skipped) over her stupid dreams.

i remember liking everyone's stories except Ilonka's. which i found sort of weird because seeing as she was the main character, i figured you were supposed to like hers, but they were so boring, i just couldn't get through them. plus, i always thought it was rather pretentious and lazy of her to go "this is a story about one of my *past* lives" while everyone else actually took the time to make up a story on their own.

After reading this recap, I am pretty sure I just skimmed most of the book. I know I read the book years ago and I remember parts of it, but I think I skipped a lot!

I thought all of them were telling stories that were somehow related to their real lives. I thought the stories were cool, but, yeah, what a derpessing book. Christopher Pike took a detour into Lurlene McDaniel land for this one. Because who doesn't love a good dying teenager story?

The thing I remember most is the cover. I always thought it looked like Sandra's breasts were on fire.

I remember reading this book back when I was in middle school. Somehow it didn't seem nearly this...horrible when I first read it. I also remember the main char thinking she was free to go and then it being Sandra who was fine. But I think I blocked out all the stories. They were too awful.

Whenever anyone dreams in any of his books, I read the first few sentences and if it says "Rishi", "Master","The dark one".. or some kind of ancient alien crap I always skip it. It should have been in only one book if any. Not practically every one. Oh, pikey poo.

It seems like it isn't such a great book. but then again, this was written a long time ago. His other books, The Thirst series, are really good. i really enjoyed reading them.

there is a major error in this book. When herme is in the wheelchair and next to teresa's bed, it says' he stood up and turned to leave'! lol

I really liked this one. It was my gateway drug to reading Lurlene McDaniel and other dying kid tales because before it I never really thought about death from cancer at that age. I found it kind of morbidly fascinating.