To be human and to be touched by the stars. 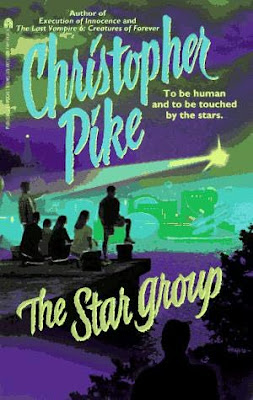 This book is easily the worst yet. The best thing about this book? It didn't crack the 200 page mark!! It wasn't loathsome, it was just boring and didn't even try to explain itself or make any sense.

The back of the book description says: "There are seven of them, three guys and four girls. Driven to return to a lonely spot where tragedy struck before". Then it goes on to mention alien contact, and I was like: "Chain Letter meets The Visitor? This could be... good?? Bad? Neutral? Or really fffreaking terrible. With a triple F. I never know with stuff published after '95."

Oh, and: there's only 6 characters. One must have gotten written out, which is probably the best thing that has happened to my life in weeks. Unless I miscounted. Or fell asleep. Or died, then my neighbour/brother/cat/boyfriend/goldfish gave up their life force so I could come back and finish reading the book. Why, oh, why couldn't they have just let me stay dead?!?

Imagine forty pages of surfing and suicide threats. I'm gonna skip all that. The interesting points:

1) surfing can be dangerous,
2) it's unusual for black guys to surf,
3) Shena's face is messed up and people at school call her "Toast,
4) kids can be cruel,
5) Dan is into "esoteric literature" and always refers to it as such,
6) Dan is a pompous fucker.

Dan has had a crush on Gale for four years, and now that it's graduation night, it's his last chance to ask her out. He approaches her as she sits on a picnic table outside school wearing Peter Nichols from Remember Me's death outfit: baggy white shorts and a red t-shirt. Christopher Pike = the opposite of Ann M. Martin (and her infinite ghostwriter army). He ALWAYS uses the same goddamn outfits. He has never described a pattern printed on a garment. Sometimes I think that's what these books need: more paisley.

Gale agrees to go to the Safe Grad (except that's not what they call it - is there a special name for it in the US?) event at Disneyland with Dan. Yay! Dan celebrates by visiting his favourite used book store to browse the New Age/Occult section. I wish he woulda bought a copy of that Sylvia Browne book about where animals go when they die. That would have changed the rest of this book, fo' sho'.

But he didn't. He bought "The Magnetic Reality" and learned how to use a magnet to communicate with... E.T.!! He gets a message from "Mentor", an alien thing that "is Dan and is not Dan." It lives 642 light years away in Ortee. It is Dan's soul. Dan and his pals are all from space and need to be awakened to their purpose. Get me outta here.

Dan takes the news pretty well and goes to Disneyland with his friends. Shena has a breakdown when her boyfriend, Jimmy, flirts with another girl. She tries to commit suicide on the Matterhorn. It wasn't as exciting as it sounds.

After the park closes, Dan goes to Gale's house. She's got incense and is into meditation. Dan's especially interested in that because he reads "a lot of esoteric literature". What a bunch of phonies these kids are. I wish this book had a bully. Just pop into the scene and give Dan a wedgie.

But wait! Now it gets explicit. Even - raunchy? I'm suddenly wayyyy more into this! Dan and Gale get jiggy in the hot tub. Nudity! Touching!! SEX!!! Daniel admits it was his first time. Gale says she's slept with someone from school, but won't say who.

The next afternoon, Dan is home alone. He contacts Mentor, who instructs him to set up a tape recorder and relax. Dan channels Mentor. Mentor speaks through Dan's voice as Dan goes into a trance.

He listens to the tape and it's the exact same crap as the Ouija board said in The Visitor. Right down to the different density beings. Dan's made a sacrifice and given up his outer space self to live in a human body on Earth. But this is the first he's heard of it, so it's not that bad. Evolution. Reincarnation. Dan's friends - "They, too, are spacemen."

Oh, good. Gale shows up. Mo' sexxxin'. Dan does his thang (first asking, "Are we using any form of birth control here?" How responsible.), then goes to sleep. He wakes up to find Gale listening to the Mentor tape. The Mentor had instructed the 6 (I was right!) of them to gather in an isolated location. The power when they all get together and learn their mission will be apparently extraordinary.

So, Shena rents a cabin in the woods at Crystal Lake. Christ, that's where Jason Voorhees killed everyone! Well, we know Dan and Gale aren't going to make it. Skaaaaanks!

The gang gathers on the porch to talk. Sal brought a gun. You can take the black male character out of the ghetto... but apparently Pike wants to leave him there. Dan brought copper sheets and gemstones, per Mentor's orders. They start talking, the way friends do, about outer space and the sky. It's so nice and quiet. Until *GASP* - sorry, false alarm. Nothing exciting. Just Jimmy going off on a tangent about how NASA is bullshit, science sucks, space exploration benefits no one, and galaxy pictures have "no relevance to daily life". And the moon landing was faked. Ok, he didn't take it that far. I wish! Maybe next outburst. This book needs more conspiracy theorists. And bullies. And paisley. Maybe a few Cosby sweaters. I'm gonna have a whole wishlist to send to Mr. Pike!

Dan segues into talking about Mentor and, oddly, his buddies don't heckle him. He sets up the gemstones and channels Mentor for everyone to hear. He talks about God, the periodic table of elements (again, this is supposed to thrill teens?), yantra, akasha (don't ask), and the seven centres of the body. Spine, groin, gut, heart, throat, forehead, crown. Dan's mind E X P A N D S !

The next day, no one clearly remembers what had happened. Dan checks in with his friends. Sal seems to have superhuman strength. Jimmy can somehow see a bag of gold buried 3 feet underground one mile away.

The girls don't seem to have any special symptoms... but wait! Gale fell and cut herself. Teri gives her a head massage and her cuts heal instantly. Shena begs Teri to try to heal her face, but it doesn't work.

They contact Mentor. Jimmy wants to know if he can keep the gold he found. Sal wants to use his strength to play football. Mentor can only guide. He can't control what they do. Dan envisions 6... I dunno - things which represent all of them. But one is different: vaguely reptilian. Suuuuure. Now you bring the lizards into it! There's only 30 pages left. God, I only ask for one thing, Pike: lizard aliens and you do it half-assed! And Mentor WON'T fix Shena's face. Now is not the time. Shena freaks out in anger and runs away.

Dan searches the woods for 3 hours before stopping to drink from a tranquil woodland stream. The water is red. He notices that Jimmy is facedown in the water with his head bashed in. Dan runs back to the cabin, meeting Gale on the way. There are so many suspects. Angry Shena, Super-strength Sal, Dan himself unknowingly being controlled by Mentor. Or, like, anyone else for any reason that could possibly materialize in this plot.

Shena still hasn't shown up back at the cabin, so Sal gets his gun and heads a search party to find her. Everyone pretty much thinks she attacked and killed Jimmy. They find her in a cave and Sal shoots her in the side. He says that she made a lizard tongue of flames try to burn him. Ok, guys, I think it's time to take the gun AWAY from Sal. The kids carry Shena out of the woods and take her to the hospital.

At the hospital a bunch o' stuff (finally!!!) happens. Sal tries to run from cops and gets shot and killed. Teri uses all of her healing life force to bring Shena back from her terminal life-support gunshot wound condition... and dies. Holy crap, it's a mass massacre (of characters that were, like, barely necessary to the story).

Later, Dan is typing the whole story of the Star Group and Mentor to send to Shena via modem. Gale shows up and takes control of Dan's free will. She forces him to keep typing. Dan compares Gale to a snake. Gale says that she mangled Shena's face on purpose so she would look scaly and Dan would suspect her of being the evil reptile and not Gale.

And you remember how Gale wasn't a virgin? Turns out she's slept with EVERYONE. Sal! Jimmy!! Shena!!! She blackmailed them all into keeping quiet.

Gale wants Dan to shoot himself. He is compelled to shoot his right thigh. Now Gale tells him he can: A) Kill himself, or B) Become evil with Gale for the next billion years and kill Shena at the first opportunity. Dan sends his story off to Shena, then shoots himself in the mouth.

The epilogue is Shena at the fivefold funeral. Everyone is dead now. She is the only survivor. Her face is back to perfection from Teri's healforce. She has Dan's story on her computer and has kept it secret. No one needs to know what happened because she, Shena, was the real mastermind who set all this shit up to stop Gale, and just figured that her friends wouldn't mind being sacrificed for the cause. Or something.


So, that's The Star Group. Back next week with Final Friends: The Party.

Posted by LongWinter at 8:29 AM

Congratulations on reading that steaming pile. You lost me after the Ouija board stuff.

The Party! I'm pretty sure that one has another yellow blouse/green pants outfit!

My high school called the safe graduation "Operation Graduation." I don't know if its called that elsewhere in the country.

Man, that book was special. I am very glad that I had moved on to mysteries and legit science fiction by then.

Thanks for taking one for the team!
Kate

I am so glad I have you to read these for me so I do not have to!

We just called our party 'Grad Night.' I am pretty sure different schools called it different things.

It's been over ten years since I've read this and I still think the Grave was the worst.

...yeah. this was one of the ones i blocked out. i completely forgot what the plot was about.

i just couldn't get into pike's sci-fi themed ones! or those overly spiritual ones either. ehh. loved the re-cap though.

thanks for the information on this blog! I find it very interesting and entertaining! hopefully soon have updates that I love your post! I thank you too!
buy viagra
viagra online
generic viagra