The Anti-Pike II: More Stuff That I Read

The jeezly book is called Heads. After that, how can anything go right? 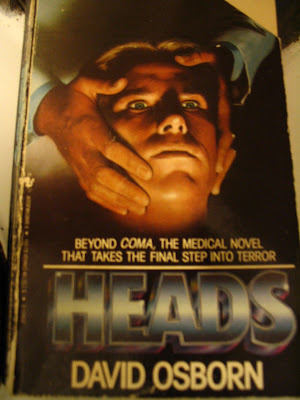 So, a neuroscientist, John, and Susan, his girlfriend/research assistant, have an enjoyable life together somewhere in possibly DC, or maybe just nearby.

John is mangled and burnt in a car crash. His prognosis is poor. Michael, a brain science researcher working on top secret shiz for the government, has been working on getting John to come work with him and share his research. John doesn't like the secrecy, and prefers to work alone.

Michael's work actually involves removing heads offa near-dead candidates in order to increase brain function from the standard 10%, which apparently is easy to do once heads don't have bodies to worry about.

Of course, Michael illegally enrolls critically injured John into the program so he can force him to continue his research. The deal is that you're listed as dead, buried, and only your head survives in this secret lab.

In addition, Michael convinces Susan to come work for him, to help sort out John's research as his head comes up with new stuff. She's not allowed into the wing with the heads, and has no idea what the project is all about or that John is still technically alive. Michael starts sleeping with Susan, natch, much to the chagrin of his business associate, Katherine, who is his girlfriend. But Susan is irresistible, what with her "slender, full-bosomed body" and her "long leggy casual look". Yeah, I know I can never look at long legs without thinking how appropriate they are for informal occasions.

There's a whole team of lab scientists, including Toni, an Asian-American (God, not "Asiatic" or "Oriental". I know this thing was published in '85, but wow, that seems out of date!) lesbian, and Al, a giant man who can imitate any voice. I swear, these people are only there to set up more horrible sex talk/fantasies. Ie: women's chests "thrusting" against their shirts (I can't lie, there's a lotta pump action in that area), "pubic contour" (whoa, sexy! that is such arousing language.... not), and "his buttocks like marble". Why do these authors always have to bring the marble buttocks into it???

Eventually Susan gets suspicious and steals a keycard to break into the heads area. She is shocked and disgusted by what she finds. John's head viciously taunts her, telling her to unzip his neck thingy and check out his stump if she really wants to be grossed out. But you know what though? I don't think Susan wants to be grossed out. That wasn't really her intention when she went in there.

Since this whole thing is government-sponsored, Susan is put under constant surveillance in case she wants to, you know, tell anyone about the heads. And, because she already knows what's up there, she's given access to see John and the other heads whenever she wants.

John is trying to find a way to break into the 1985 internet and post his research findings, and blow the whistle on what's going on in this hospital. He finds the password, and is too threatening, so the other doctors kill him.

With John gone, Susan is considered a loose cannon. The only thing to do is to remove her head so they can keep her intelligence and knowledge, and not have to worry about, like, anything else.

Susan sets a fire in the OR right before her decapitation, and escapes. She knocks out Katherine, Michael's lady friend, and steals her doctor duds so she can escape unnoticed. Al, the other doctor, comes upon Katherine's unconscious body and, deciding that he never really liked her, disguises her as Susan and makes Michael unknowingly decapitate his own girlfriend.

Yeah, that's the ending. I did read this start to fin, by the way. Now I need to, like, compost this thing so I never run across it again. Stay tuned for The Star Group on Thursday - it's the worst. I would friggin' kill the shit out of it... if I knew how. And start getting excited for Final Friends, coming up Halloween week.
Posted by LongWinter at 9:20 PM

Argh, I know this is the least of anyone's concerns about this book, but that whole idea that we use only 10 percent of our brains is a total myth. And it drives me crazy whenever I run across it. (Also, I think I might just have read this book back in the day. I don't remember all the "marble buttocks" and "thrusting breasts" stuff, though.)

What a weird book! The cover kinda freaks me out. Where did you even find this?!