The path led to magic... and danger! 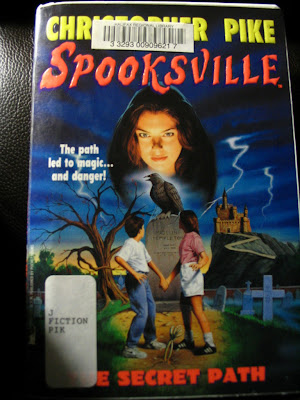 Adam didn't believe all the stories about Spooksville.


Twelve year old Adam Freeman has just moved to a new town... uh oh. Can someone tell me how many R.L. Stine books begin this way? 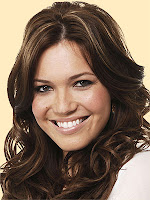 Adam soon meets Sara "Call Me Sally" Wilcox. That is an acceptable nickname, so I'm OK with it. Sally talks a lot. She tells Adam that she's going through some kind of tween identity crisis. Pike was a little ahead of his time on that one, I think. Sally says the town is haunted, and that her friend Watch (Unacceptable Nickname #1) saw a girl disappear into a cloud while partaking in some seemingly safe kite-flying. Ha! I've read enough Peanuts to put the kibosh on that idea. Safe kites! Hrrumph!

Oh, but Sally doesn't want Adam to get the wrong idea. She's single, and has no romantic feelings for Watch. Her mentioning him means NOTHING. "If he wasn't so weird, I'd be attracted to him," she says. I wish I was that sensible.

Another thing you need to be careful of in Spooksville is robots. A mother walking down the street with a carriage might not have a real baby inside. It could be a robot. Adam's reaction?

"I don't believe in robots. There are no robots. That's a simple fact."

I thought I, Robot was scary, too, but there's a point where you have to quit lying to yourself and grow up.

In a parking lot, Adam dives to stop a runaway shopping cart (which was totally the name of my band in my childhood rock star fantasies) from hitting a car. The car's owner is Ms. Ann Templeton (ahhh, the sweet sight of progress: Pike no longer considers Ms. an italics-worthy title, as it was in '88 in Last Act.), great-times-4-granddaughter of old town witch, Madeline Templeton. Ann thanks Adam for his good deed and invites him to visit her castle sometime.

The kids take off, planning to go to the arcade, but Watch (so named for the two watches he wears on each wrist) wants to visit Bum (Unacceptable Nickname #2) first. Bum used to be mayor, now he's the town bum. Where I grew up, the town bum used to be a professor. We called him Earflap Jack because he wore an earflap toque year-round, and because it's a before-and-after and we love The Wheel.

Bum tells Watch how to find the Secret Path in exchange for sandwiches. The Secret Path is part of town legend. It is said to lead to magic, danger, and other Spooksvilles in other dimensions.

Now let's refer to the back of the book: "Together Adam, Sally, and Watch will take the Secret Path and pass through a dark doorway. On the other side they will find a terrifying Spooksville where there are huge spiders, living skeletons, evil black knights, and a witch who just loves to make dolls - out of kids." Well, I, for one, think that deserves an exclamation point (!).

So, that's exactly what happens. In the same order. Soooo, I guess if you like suspense, you may be out of luck. Like, they take the path... check. Oh, huge spiders. I actually think there was only one, but putting a singular huge spider in the book description is awkward and lame. After that happens, the living skeletons show up, natch. Then the evil black knight is on the scene. And next the witch, who has a stash of deformed children shackled in an underground jail.

The witch captures Watch and Adam, but Sally gets away. As the witch is preparing to remove her favourite parts from the boys for use in her doll collection, Sally breaks into the castle and busts the hell out of the witch's hourglass, which runs upwards and is filled with diamond dust. Classy. I wonder if it's an official Seyko timepiece??

The kids escape in the confusion and run to the cemetery, where the wormhole is that will let them escape. The witch follows them, but is pulled into the ground by a reprise of the living skeletons, allowing the kids to escape back to their reality.


I have had Googled hits from presumable children looking for plots of Spooksville books, so I'm providing an in-demand service here. So, all in all, I liked the book. Sally had some funny lines, it wasn't boring or anything, so I guess the only drawback is that the book loses some of its awesomeness when you're as old as fucking hell reading it for the first time.

What I liked BEST about the book was Chris Pike's About the Author. He totally discarded the old one used in all the YA books and came up with the most insane author bio ever. Which I will discuss... next weekend.

And if you're around on Thursday, why not stop by Like Pike for a recap of Fall into Darkness?

Hmm...I think the freaky hovering head on the cover looks like a young Brooke Shields.

I am so excited Fall Into Darkness is next! I can't wait. That is one of my all-time favorite Pike books. Did you see the tv movie they did? I thought it was actually pretty good.

I never read any of the Spooksville books. I never even heard of them until just recently when I checked to see what Pike books the library has.

I'm making Lauren's dip tomorrow! I plan to post a blog about it. ha

FS - You're right about Brooke Shields. I think it's the brows...

& Zanne - yes, I did notice that! I can't wait for your dip review. Is it actually THAT good? Would you wanna eat it, like, every weekend of your life? I need the details!

I really enjoy reading Spooksville series, even if they are books for kids( i'm almost 18). And i don't mind re-reading them...they are a nice distraction from the monotonous life.