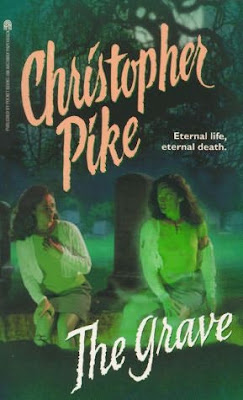 The grave is not the end of the story.

This thing is a disaster/failure/nightmare of the epically highest order. I don't even know how this book, The Grave, was allowed to happen. It's like: you read it, and you think you're down with it even though it sucks, and then there's a major whammy and you're all: "WT...F?"

The book opens with 19 year old knob Ted meeting and dating Dara, who has permed long hair "the color of simmering corn on the cob, invisible steam rising through blond curls". How - who... I mean, whaaaa?? Only page two, and this prose is pukeworthy ALREADY. How'm I to cope?
After three dates, you know what it's time for... yeah, not that. I wish. Actually, three dates means a midnight hike to a "burial ground". What Ted doesn't know is that he's gonna be the one initiatin' this here burial ground. A gang of creeps attacks Ted, cutting his clothes with knives and ripping them off: "Tearing was followed by atrocity - his pants and underwear were pulled down...". Ted's junk is atrocious? OMG, I love it!
Ted is covered in pig's blood, buried in a sealed coffin, and left to die.
Next we meet Keri, who works in a CD/DVD shop, where she meets Oscar. I'm just gonna tell you now that Oscar is the new incarnation of Ted, so you won't be surprised later.

Their meetings at the shop included such conversation gems as:
Keri: "You're different from most of the guys who come in here."
Oscar: "I'm grave?"
Yeah, Oscar, you're grave. And from beyond the grave. I get it. *gags*
Keri already has a boyfriend, Clay, but it doesn't really work out with them. She wasn't that into him, actually. I only bring him up because he went to a movie one night while Keri was working. It was called Kill the Cop and starred rap star Chrome Shoes. Friggin' Chrome Shoes! Man, what were you smokin', Pike? I know it was 1999 and you couldn't keep mentioning David Bowie, but there's no need - there's NEVER a need - to call your "rap star" Chrome muthafuckin' Shoes.
So, Keri and Oscar go on a date. The destination: his place. That was fast. He's an artist, and he's totally colour-blind. He can only see black and white. He owns a boat, so he and Keri go sailing. After he "raises his mast" (you know what I mean), we're told that Oscar isn't human: "No, Keri Weir did not understand that she'd just made love to death itself."

After this, Keri experiences menstrual symptoms, but it's not near her special lady time. There's a cold ache in her gut. She doesn't have much time to worry about it, because later that day she is grabbed, drugged with a chloroform rag, and stuffed into the back of a car.
Since Keri was getting ready to meet Oscar for a date when she was grabbed, she's understandably not wearing any underwear. Go, Keri. Hawt and classy. Her captor pulls down her pants - OMG - more atrocity?! Nah, Keri doesn't have issues with her biz, and the guy is just injecting her booty with some kind of serum.

The guy puts Keri into a grocer's freezer. It's not just for toaster strudels anymore! She realizes she's going to die. This freezer will be her grave, but... the grave is not the end of the story.

Keri dies, then wakes up. She finds that she is super strong, ripping the door off the freezer. The grocery store is closed, so she helps herself to, like, 9 rotisserie chickens and some other assorted snacks.

Outside the shop, a gang of hoods give her trouble. The leader gropes her chest, so Keri knees him in the groin. However, a superstrong knee to the groin shatters bone(r)s and ruptures organs. The guy bleeds out on the ground while his pals run off. Except for one, who Keri catches. She gets in his face and tells him to stop being a jackoff and to grow up to be a doctor... she'll be watching!

Keri remembers where she'd seen Oscar before - in the newspaper, as dead boy Ted. She goes to his place, where he's waiting with Dr. Gary Schelling to explain why they kidnapped her and left her to die with the Carvel ice cream treats and rising crust pizza.

This whole dying-then-not-being-dead-anymore thing came about when Dr. Schelling, a geneticist, discovered a way to manipulate the human genome so people can live forever. Inject his discovery into someone, kill them, and they'll be on their way back just moments later, ready to live forever unless they are incinerated. Even if decapitated, a new head and brain will regenerate, but the brain cells will be different. Maybe even evil...

The purpose of the experiment was to save his daughter, Dara, who was dying of leukemia. After her dose, she changed. She was evil. She dosed and killed her brother, Eric, who became evil too, and started an army of "two dozen fiends."

Keri's metabolism is crazy-rapid now, which is why she needs to eat 24/7. Dr. Schelling tells her that her pregnancy will be only 9 days long.

"What followed next was like a scene from a bad movie." I love how Christopher Pike himself sometimes had to acknowledge that what he was writing was, like, cheesy as hell. Oscar, Schelling, and Keri are hanging out when the door knocks. OMG - is it fiends? The guys grab some semis from the hall closet, just as Dara and her fiend goons bust in with their own guns.

Oscar, Keri, and the Doc escape to Oscar's boat, but there's trouble in the air. Evil Eric is in a helicopter shooting at them. Can you just picture this? Dara captures Oscar and Keri and takes them to a cave in the desert, where they are to be held until Keri gives birth. Dara wants the baby. She calls it The Dark One.

The baby arrives and proud parents Oscar and Keri decide to name him John, after both of their fathers. In just 20 days, he is full grown and "built like a god". Dara still hasn't let them leave the cave, but does provide John with learning materials. He even uses the internet to learn stuff. When John asks for seeds, Dara brings them. John can make plants and fruit grow in the dark cave just by talking to the seeds.

One day, there's a ruckus at the back of the cave. Dr. Schelling and the government have finally come to save them! They bomb the cave and Keri burns to real death.

In the epilogue, Oscar speculates that John is an incarnation of Pan, king of the fairies, sent by God to save the rainforest.

"Humanity has polluted every corner of the globe. Maybe John will be able to fix the damage."
After all the shit this book put me through... it's about the environment?!? I hate the environment. I do. It's everywhere, and it's always annoying me. Ohhhhh, the disappointment. It hurrrrttts!!! I don't know if I can go on reading these treacherous late '90s titles. My verdict: Pike should have quit life after The Midnight Club. Which probably isn't even as good as I remember it. Let's find out next week!
Posted by LongWinter at 8:21 AM

I...don't understand. All I can remember is that he was one of those "Will he be a good Messiah or a bad Messiah?" Messiahs. On paper, this sounds ghostwritten. Even for Pike, there's some weird stuff going on. But I think I just pulled my copy from the basement, so maybe a reread will prove to me that it's really him.

Yeah, this was barely Pike-esque. I mean, it involved parenting! Like Keri giving birth and baby-talking and being a mother. After you re-read it, let me know your conclusion re: the ghostwriting. Seems weird that in 1999 Pike would put out one last YA book and not even write it himself. Maybe he just lost whatever touch he may previously have had.

Oh wow this sounds horrible....I could just tell this was going to be one of the later ones...it does read rather like a worrying glimpse into Pike's brain. Suprised that no magical spiritual crystals make an appearance though, this seems like a prime contender to involve a coupla crystlas.
Midnight Club - woo hoo.

Holy Hell, that books sounds like a hot mess. It's almost as if Pike had one book left on his deal and decided to put some seriously fucked up shit on paper just to see if the publisher would actually print it.

Huh? What is this? What's the point of this novel? Pike's craziness is one thing, but this is just...bland. I'd rather it was ghostwritten than Pike's own work.

(And for some reason, I remembered The Last Vampire series when the whole thing with the pregnancy and the fast-growing child popped up. Was there something like that in those books?)

Yes there was. In the forth and fifth ones.

The Grave is beyond awful.

I'm sorry, I love your blog and your recaps are great, but I gave up about halfway through. This one sounds awful. I will try again later! I don't know how you got through this book! I know I never read this book. The title doesn't even sound familiar.

Holy crap, I remember this book. I think I read it when I was 13 or something and thought it was really cool and weird and stuff. I'm kind of tempted to re-read it and see what horrible taste I had as a preteen.

i actually liked this book... right up until the last two chapters or so. then it went from interesting, if laughable, story straight to laughable and then just pathetic.