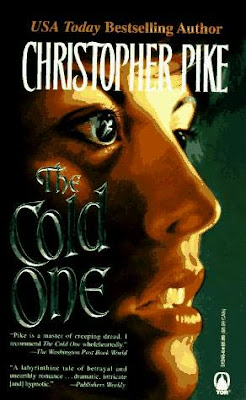 There's no front cover/back cover taglines, so you can make up your own using these related keywords:

Ok, number 1: This book has, like, 60 five-star reviews on Amazon. Which is far-fetched as hell. If you pick up this book as a regular person looking to read a normal thriller novel, you're gonna be like: "WTF?" when you get to page 139 and all the action moves to India and there's 40 pages of guru-kriya-chakra stuff that I only know about because of Remember Me 2, and you know that the rest of the book is gonna annoy you (and by you I mean me) because it's going to have to incorporate that shiz.

Number 2: Why all the guru stuff, man?

So, this is just going to be a QuickCap because I finished reading this days ago and I need to get it out of my memory so I can read something else... i.e. Whisper of Death. Or R.L. Stine's "adult" novel, Superstitious, which I currently have in my possession, and I think I'm really gonna like. Hahaha. (There's sex and cussin'... and I've only read the prologue!)

The Story, told through Selected Characters:

Penny Hampton - In Prologue I (yup, there's multiple prologues), Penny, a physical therapist at a long term care facility, is massaging Patient 111, who uses an oxygen machine to breathe, during a storm. The power goes out and the generator fails. Penny does the breathing part of CPR to keep the patient alive. She feels weird during and after, and feels connected to the patient forever after. She believes that if the patient ever dies, so will she.

Sandra Morray, aka Patient 111 - First wife of Dr. Lawrence Morray. She had a drowning experience 30 years ago and has been in a coma since. She gave birth to twins, a boy and a girl, 9 months after going into the coma.

The Cold One, aka Leslie, aka Sara Morray, aka Ruth - The Cold One kills people and things, and can transform people with a kiss into some deranged killing machine monsters. Leslie is the name she uses as The Cold One's public persona. Sara Morray is the second wife of Dr. Lawrence Morray. She is 30 years old. Before coming to California and meeting Dr. Morray, she was known as Ruth. She was one of the twins born to Sandra Morray during her coma, and adopted by a family. She was a creepy child who caused her adopted brother to go insane, and who killed her adopted parents when she was sixteen. Yes, she is currently married to her birth father. She had miscarried their baby, and Dr. Morray saved the fetus and did experiments on it. It wouldn't die, so Sara put it down the garbage disposal. Peter Jacobs is infatuated with her, which is convenient, because he is the other twin and his seed is the only one that can survive inside her. Uh huh, believe it or not: more twincest.

Dr. Lawrence Morray - Used to do research into near death experiences, but has kept his research secret for many years. Julie Moore contacts him to ask if she can look through his notes.

Peter Jacobs - So, you think he's all nice and stuff. He grew up in an orphanage, and still takes care of his childhood friend, Matt, who is slow. He meets Julie and Sara on the same day. Sara is married, but he wants her anyway. This is his twin, remember. He dates Julie for sex, then avoids her, and that really sets her off.

Matthew Bill - Peter's slow friend/roommate. At the end, The Cold One/Sara kills him, but Peter gives his life to bring Matt back.

Julie Moore - A doctorate candidate studying near-death experiences. She dates Peter, and almost gets killed by The Cold One's minions. And it turns out she's pregnant by Peter's cold seed, which is supposed to set up the sequel, The Seedling, which is advertised twice at the back of the book, but was never published, and possibly never even written.

Govinda Sharma- So, this guy is a citizen of India who used to live in the US. He went to an American university and married an Indian woman who was also living in the US. She died while she was pregnant, and Govinda went back to India to recover. Some people ask him to track/follow Rak, a 5000 year old guy who had, like, fought with Buddha or something. (I'm so sorry, I have no idea what this guy's scoop is, or how he's attached to the American characters. I can't pay attention sometimes... I'm gonna blame it on me finishing the book last weekend and not thinking about it again until this weekend. And that I barely skimmed all the chanting/guru stuff...)

Rak - This guy is 5000 years old, blind, and a Yeti, but still sexy and good looking, and has control/power over people. For example, he left India and flew to Los Angeles wearing only a loin cloth and no one called him on it. No one seemed to notice, in fact. Govinda tails him on all his travels. Rak goes to meet Lawrence Morray and tells him a fairytale that is meant to make him realize his wife/daughter, Sara, is evil.

In the end, Sara kills Matt, then Peter dies to bring him back. Then Sara senses that she's about to die. Dr. Lawrence Morray went to the facility where his first wife is cared for and cuts her ventilator line. But - OMG - Sara, the evil twin daughter child, has been living off her mother's life force. And she does die. Ok, whatevs. There's an epilogue where Govinda and Julie are visiting, and Julie has a daughter, the child of Peter's cold seed. Then my misery (and this book) is over.

Has anyone else here read this one? Were you an Amazon-five-star fan? Or a WTF-er, like me?

This one will probably go down with the Christopher Pike books that annoy me the most. Seriously, I was irritable as hell while reading this. I needed to pig out on Cinnabon and ketchup chips to get me through it. It was worse than work. And worse than work is as bad as anything can ever be.


Whisper of Death. Thursday. Maybe Friday. See you then.
Posted by LongWinter at 12:25 PM

Dude! Does Pike not have editors anymore? Can no one rein the man in???

That sounds all kinds of crazy. I never cared much for the books Pike went all theological and/or philosophical on his readers.

I have also noticed the yellow and green clothes combination in other books. It was in the last Pike I read, which I think was Gimme Me A Kiss. Or Die Softly.

I really like your blog. Hope you don't mind that I linked to you. Also, I have Sati and Season of Passage if you don't already have them. They're not ones I'm going to read again.

I always assumed the sequel was never written because he did the evil child story with Sita's daughter Kalima (who turned out not to actually be evil) in the later "Last Vampire" stories.

This book had me believing in a possibility of a supernatural life :p Gotta love the man for inducing some spark into bored people.

ok first of all its like 2am and i have to be up in 3.5 hrs to go to work but I just had to keep reading this stupid book to find out what happens in the end. It was like a train wreck, where you cant stop looking just to see the horror.

WTF with the sequel - first of all if I had known there was a sequel i would not have stayed up so late tonight. second of all, there is NO sequel.. so now i'll never know if julie's daughter is gonna be the next cold one cuz she's a "seedling" right?

Yeah, i thought this booked sucked major donkey balls. I also completely skipped every chapter that took place in India b/c seriously WTF, I dont have time for that crap, and in the end it didnt even affect the storyline. AGH.

okay, rant over. Thanks for this blog- i should have read it first before i opened this retarded book.

ps: kalima - isnt that the same thing the cult leader guy in indiana jones two (the temple of doom) says before he rips out your heart?

I liked the book ok, but it's pissed me off to no end the pike decided to not write the sequel he promised that summer at the end of the book. If you aren't sure you are gonna do a second one then just don't say shit- it's annoying to look for it and then finally find out on some random chat room since the guy is so illusive that it got nixed cause 'he doesn't have the inspiration for it anymore' or some shit.

I read this book about 3 years ago and don't remember all that much of it, but from the way it sounds, that's probably a good thing, which, to me is wierd, b/c i enjoyed other Pike novels like Remember Me, The Last Vampire Series and Falling. He must have realised that this book was crap and probably decided not to write a sequeal...

This book was probably the worst of the Pike "adult" novels (but I still count The Season of Passage as one of my favorite books ever).

Also, I just discovered this blog and I love it.

i also just discovered this blog, these recaps are pretty funny.
i definitely read this when i was 12 and don't remember it being this nuts. and i believe sita's daughter's name in the last vampire series was Kalika, though i realize that's a disambiguation.

I actually liked this book for some reason, although I can't remember exactly why.

This is 2011 and I still would like to read the sequal to The Cold One; it was a good book, but your left out in the cold not knowing what happened, I was looking forward to reading part two.

I have been a Pike fan since my younger years...I was just searching for a new book to read. The last of his I read was "The cold One" and I am so disappointed at finding the sequel was never/never will be published. Now I find Alosha, only to hear the series will not be finished either. What's THE DEAL??

Oh, God. . . It's so hard to avoid this blog while reading Pike novels. I was reading the Cold One the past couple days and kept coming back on here - - For, um, some reason. I'm not even sure why.

But anyway. I actually rather liked this book; Though . . . It seemed a bit Spellbound-ish to me. Anyone else get this vibe? Joni/Sara just felt so alike.

But yeah. . . Actually, I thought this was one of his better books. Not one of his usual thrillers/horror novels, but one that delved more on the emotional aspect of things.

Want To Boost Your ClickBank Banner Traffic And Commissions?