Spooksville #13 - Creature in the Teacher
"Their teacher was not normal."

"Adam never imagined his first day of school would be so bad."
So, a down-on-his-luck alien tries to find a home on Earth for his race of alien people whose home planet has been destroyed, but the Spooksville gang is all: "Nuh uh, we don't think so", because these aliens, like, eat hamsters and disguise themselves as schoolteachers, and the alien teacher kidnapped the class wimp and took him to outer space.
After transporting the brave kids onto the alien spaceship to rescue Wimpy, they land in Africa, and then use a time travel thing to send the aliens back in time to live on Earth in dinosaur times, on the condition that they don't change anything and find somewhere else in live within ten thousand years.

Spooksville #17 - The Thing in the Closet
"It was real. It was scary. It was not nice." 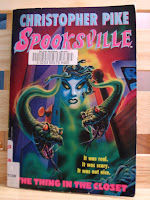 "Most kids are afraid there might be a monster in their closet."

So, by being afraid of her closet, Cindy opened a fear portal into a land called Centrae. An elf boy helps her find her way while she waits for her friends to rescue her. The others show up in time to help Cindy and elf boy sort out some turmoil involving evil beings who can only be defeated by being laughed at, then they all go home.

"The evil was in the phone lines." 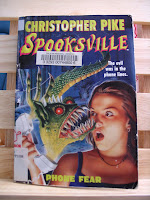 "The gang did not understand who or what was calling."

So, Bryce, this candyass kid with a cell phone, starts getting crazy calls telling him to do stuff that he's obvs not gonna do, like burn down his mail carrier's house. The caller is named Nernit. Watch leaps to the conclusion that it's actually spelled "Neernitt" and it's the Internet calling. OMG - the internet is after us! I guess after everything else I've accepted from Pike, I can't start nitpicking now.

Neernitt has an army of followers who hold Watch, Bryce, and their friends captive until they agree to build Neernitt a body. Being the internet is cool and all, but moving around is apparently better.

Watch - I dunno - makes a body out of a robot friend he had who died in an earlier book, and then rigs it to trap Neernitt inside it once he puts his - I dunno - mental prowess into the body.

Geez, what does the Internet have against mail carriers? Plus, wouldn't the Internet, like, E-MAIL you?

Oh wait, I just answered my own question. DUH.

Phone Fear sounds a bit too similar to that episode of "Buffy" where Willow falls in love with a demon who exists only in cyberspace (until his nerdy minions build him a body)!

A commendable blog (and one of the first I've chanced upon and managed to continue to read), these stories bring back a few memories....

I enjoyed reading this series when I was in school - Spooksville is somewhere between Goosebumps and Phillip Pullman in terms of the 'horror' maturity cycle of command.

Adam was a fundamentally boring piece of work though. His character didn't really develop through the series, and he was one of the most predictable characters in literary history.

Neernitt was being controlled by this girl(i forgot her name). She pretended to have been sent to kill Adam, She couldn't use e-mail because at that time you couldn't read e-mails on cell phones..and i don't think anyone surfing the net will leave suddenly to perform some insane orders from some loony.
To HarrisonZKemp
Also Adam is not boring, he is just twelve years old. Put yourself in his shoes and tell honestly, would you have braved half the dangers he faced? Would you be ready to sacrifice your own life to save your friends?

Whoa, I loved this series when i was twelve years old and I've never forget it. I'm Spanish and teh two last books were never published here, so I'm glad I've found your blog. I can't wait to read about the last book because I never got to know what happened to the kids at the end!