The Anti-Pike: Other Stuff That I Read


An Original Sin by Nina Bangs. Bangs. And she writes raunchy romance novels. Strike one.

This thing turned up at my workplace book drive, which sent me on weeks-long mission to discover which of my co-workers was the donor and original owner of An Original Sin.

I made a list of suspect co-workers based on who I thought would most enjoy a story of the devil, bored, and in cat form, sending both a 1700s Scottish warrior-guy and a woman who lives in the year 2300 where men are extinct, to the year 2000 where they find conflict and romance as the devil cat stirs shit up between them.

I spoke to each suspect, telling them I had a great idea for a story I wanted to write, then I described the plot of An Original Sin. I waited for someone to say: "Hey, I already read a book with that plot. It's called An Original Sin by Nina Bangs. Actually, you might like it. There's an unwanted copy in the book drive box, if you want to check it out." I never found out who donated it, by the way. I feel that this person probably knows I only want to make fun of her and has taken steps to throw me off her trail.

So, I stole the book from the sale leftovers and keep it at my desk, where I sometimes hold random read-alouds from the text. It is bad. It's not even the fun kind of raunch-tastic bad. It's almost not even readable, mainly because all the guy's dialogue is written in a treacherous Scottish accent, which makes Ann M. Martin's Logan Bruno accent look competent.

Accent Example: "Ye could drain a man dry wi' only yer stare... If I dinna please ye, I might leave yer bed wi' my manhood a wee shriveled berry."

The whole book, guys, the WHOLE BOOK is like this! And this is me complaining! I say "yer"! (Recently I've been trying to stop talking like a hick. No more yer and fer... also trying to pronounce 'about' more Americanly (a-b-ow-t), rather than 'a-boat' - not aboot! NEVER aboot! - but it's hard to change stuff like that. I digress...). 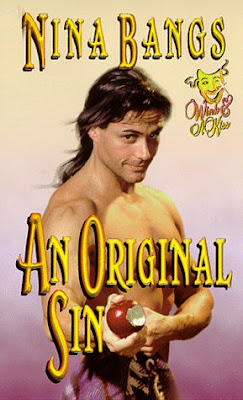 Hey, check that cover close up! Ok, I have spent literally hours looking at this cover (the book's been propped up in the corner of my cubie since last March), and that guy is not sexy. He looks like a goofball and his kilt thingy looks like a blanket my grandmother used to keep in the trunk of her car.

The back cover tagline is: "MEN'S BODIES WERE HER BUSINESS." If that's not a line for daily usage about your ho-baggiest friends, I don't know what is.

Just to make it even more historically awesome, her name is Four-Two-N "Fortune" MacDonald. He is Leith Campbell. Lotta bad blood between those families. I guess I have to take this seriously now. Ok, it's pretty telling that I accidentally typed "not" instead of "now" like 3 times before my typing psyche would understand the sarcasm.

And not to make out that I've read the whole book, because I totally haven't. But I have researched it to the max. Obviously, there's such a thing as romance novel fans. Then you have your time travel romance fans. And, even more specifically, you have your time travel romance fans who like it best when both partners travel through time. And these fans feel VERY strongly about their preferences.

I was going to do two books, but I think I'll save the other one for next weekend. It's possibly even doozier (more of a doozy? you know what I mean) than this one.

It's time for well-wishes: Canadians, enjoy your Thankgiving. Americans, enjoy observing Columbus day. Other citizens, just have a good one doin' what yer doin'. I'm going home for the weekend to freeload turkey, pie, and whatever other baked goods I can get into me. Visit Like Pike on Thursday to get the scoop on Pike's The Immortal.
Posted by LongWinter at 1:45 PM

Sounds super-corny. I really hate reading accents in books because they're always horrible, and AMM always does them the best (worst?). I might have to look this one up, the plot sounds crap-tastic!

Thanks for the posting time tip--it worked like a charm!

Yay, I'm so glad to have helped! Any luck with the bullets?

Oh man, that is freaking hilarious :D The cover is killing me slowly...check out that mullet!

Oh, this is nothing. She was dropped by her publisher and now self publishes. She has a book out now called "Death by Ploot Ploot".

I guess it could be worse. You could have found one of Cassie Edwards' plagerized 'Savage' books. I just got one of those from my aunt.

That poor man looks so embarrassed to be on that cover.
"Hey there sexy wrench, would you care to partake in some apple eating? It's reminiscent of the original sin, don't you know. The serpent is my penis."

I am a self-admitted lover of the trashy romance novel (I go through and correct the historical inaccuracies in them), but this looks like something not even I would touch. This is just proof that shit can be used to typeset books.

Bangs = NOT SEXY. By that I mean both Nina Bangs and the bangs that the Scottish dude appears to be sporting.