Did you ever read the About the Author segment in the back of his books? I love how, like, among his favourite activities is stealth-rearranging bookstore shelves to put his own books in the best spot. That is awesome. Because if I were an author, you know that's what I'd be doing. 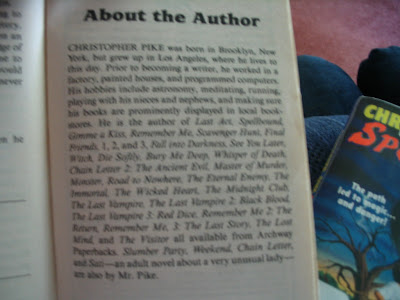 Not even to mention that it's the longest author bio I've ever seen. The previous jobs, the many New Age-y hobbies, the titles of every freaking single published work. This is verging on extreme. Like, do we really need the titles of every Last Vampire and Remember Me? For being such a mysterious guy who we know nothing about, he seems to be giving a lot away right here.


For the Spooksville series, he switched it up a little. Maybe he figured that little kids won't read an About the Author anyway, so he can pretty much say whatever the hell he wants. It is the most enigmatic and bizarre author bio I have ever read. It's the Legend of Christopher Pike.

"Little is known about Christopher Pike, although he is supposed to be a strange man. It is rumored that he was born in New York but grew up in Los Angeles. He has been seen in Santa Barbara lately, so he probably lives there now. But no one really knows what he looks like, or how old he really is. It is possible that he is not a real person, but an eccentric creature visiting from another world. When he is not writing, he sits and stares at the walls of his huge haunted house. A short, ugly troll wanders around him in the dark and whispers scary stories in his ear.

Christopher Pike is one of this planet's best selling authors of young adult fiction." 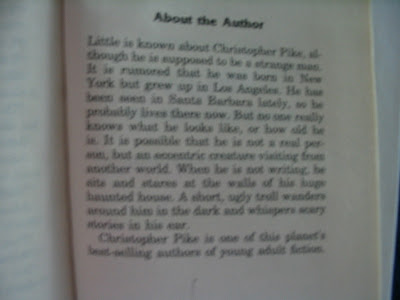 The troll muse from the story-within-the-story in Remember Me 2: The Return makes an appearance! That's kinda cheap, recycling it here. Unless it's true. It couldn't - you don't think - what if he... nah. Right???

And how about "staring at the walls of his huge haunted house"? These are his two options for activites: writing or staring at the wall like a psycho. And bringing up that his massive popularity is limited to "this planet"... so far. What a nutty guy. Or alien creature. That's a possibility too.

I remember the part about Pike saying he rearranges the books at stores so his are in the best spot. That is hilarious. I also remember how it said "Sati - an adult novel about a very unusual lady" at the end. I guess I was intrigued enough by it, because I did read Sati.

The spooksvile bio is awesome. I so want one like that. ^_^

Pike seems a little full of himself in his bios. I mean, he is the man, but still. Knowing it and saying it are two different things!